Join Our Newsletter
Shop Our Store
MAIN MENUMAIN MENU
By Brian McLaughlin on March 1, 2019 in DGU 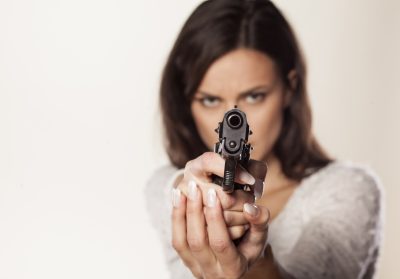 In an interview with News 5 WKRG, the homeowner, who wished to remain anonymous, said she was awakened to sounds of her dogs barking and front door being broken in.

Alerted, she retrieved her home defense pistol and went to investigate.

Surveillance video footage of the attempted break-in shows a man wearing a gray hoody sweatshirt, exit a gray Kia Soul and approach the front door of the home.

The footage released by the Sheriff’s Office does not show the act of attempting to break into the home’s front door, but cuts to the man running back the Kia and trying to get inside.

The door of the car is locked, however, and he spends a few tense moments waiting for his getaway driver to fumble the lock open.

Just as he jumps inside the escape vehicle, the home owner exits the front door and fires a shot from her semi-automatic pistol at the fleeing criminals, who speed away, bumping into a garbage can as they do.

In an interview with News 5 WKRG, the home owner said the situation was tense and she was glad her child was not home at the time.

Investigators believe the man in the video is behind a possible 3 other attempts to burglarize the home earlier that same week.

The Mobile County Sheriff’s Office posted the surveillance video to Facebook as a warning to criminal’s that Mobile homeowners are not to be messed with.

But, the Sheriff’s Office edited the original footage to make it seem that the homeowner had rapidly fired off the entire magazine in the pistol instead of just a single round, as she actually did.

The TEAM SHERIFF Facebook page poked fun at the would be burglars in the post with plenty of spot-on hashtags, saying:

“IT IS TARGET TUESDAY!

THUGS BEWARE…Homeowners are tired of you and here is a prime example. Just before this thug gets back to his car, the homeowner fires shots as car is leaving the scene. #toobadtheymissed? #thetirethatis #weaddedmoreshots

If anyone has any information about this crime, please call 251-574-8633. You may also go to our website, www.mobileso.com/crimetips/. Together we can get these thugs off our streets. #never2fullatmetro #wealwaysmakeroom #readthedisclaimer #thisreallyhappened #weaddedthevoices.”

A CYA disclaimer about the edited version of the shooting cautions against taking the post too seriously:

Good home defense is no accident. It takes planning, preparation and training. Brush up on your skills and learn something new with the Complete Home Defense – Tactics For Defending Your Castle.

What lessons stand out to you from this home defense example? Do you have a plan in place for a scenario like this one? Leave a comment below to let me know.

Does Alabama Accept Online Concealed Carry Classes?
“What Were They Going to Do, Chop Our Heads Off?”