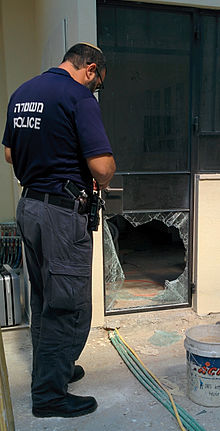 Phenix City, Alabama — Police are looking for two men who tried to rob a jewelry store in Phenix City on August 14th.

According to police, two masked men armed with handguns stormed into Custom Jewelers on US Highway 80 at around 12:30 p.m.

The store owner, Rusty Gorman, told police he saw the gunmen enter his store and went to meet them, armed with his own gun. He opened fire on the suspects, causing them to turn around and flee the scene, leaving their get away car behind in their haste to put distance between themselves and the armed Gorman.

Gorman was not injured in the attack, but police think one of the assailants may have been struck by the store owner’s gunfire.

Gorman told WTVM 9 he’s happy with the police and their response to the situation and is confident the suspects will be brought to justice,

“They sent an investigator out this morning following some new leads (the investigator) has and I really believe within the next few days, they will have these guys in custody. I want to see them in jail. I don’t know what their intent was, but they come in with weapons and that puts my employees in danger,” he said.

“You know any time someone points a gun at you and comes in with a weapon, your life is in danger. So therefore, you have the right to defend yourself and that’s what we did yesterday.”

Justin Clark with the Russell County DA’s Office agreed with Gorman that he was was acting within his rights to engage the suspects with deadly force,

“If you are at a business and you saw men come in with masks on and they were armed, then you would have the right to defend yourself and also others in the business.”

Anyone with information is encouraged to contact the Phenix City Police Department.

Many of the same tactics and techniques for defending your home apply well to defense of your business. Read hear for the Complete Home Defense – Tactics For Defending Your Castle and brush up on valuable skills.